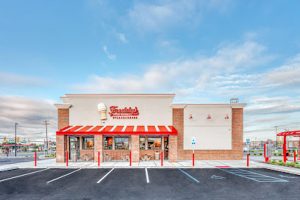 Freddy’s was founded in 2002 by Bill Simon, Randy Simon, and Scott Redler in Kansas. The restaurant was named after Bill and Randy’s Father “Freddy” who was a World War II Veteran. Freddy Simon’s family values and patriotic service to his country are the foundation of the restaurant concept.

There currently is only one Freddy’s Frozen Custard and Steakburgers and that’s in northern New Jersey in Linden. This may soon change because Freddy’s has its sites possibly on Toms River!

I’m not surprised, but I’m also a little surprised, I’ll explain. The
They’re in the backyard. They’re up on the roof and at the
Last winter, residents of north suburban Winthrop Harbor joined online to follow
There will soon be 88 Chipotle locations in New Jersey with seven of them
There’s nothing quite like getting some candy while you’re at the Jersey
Go to Top